What are the most valuable skills you gained from your Arts & Sciences education?

Thanks to my Arts & Sciences education, I am a fluent reader, writer and scholar in four different languages. I have taken writing seminars and philosophy courses in English, the highest-level undergraduate literature and culture courses in Italian and German, as well as advanced courses in Portuguese on Lusophone history and culture. I wrote my honors theses on Italian and German works of literature, and I spent a summer conducting anthropological research on Quilombola communities in Brazil. The ability to think critically and express myself in several languages has contributed to my analytical skills, professional development and provided me with an international perspective.

What is your main extracurricular activity and why is it important to you?

After my first semester at Cornell, I was invited to participate in a pilot program for language tutoring through the Learning Strategies Center. I became the first Italian tutor at Cornell, and during my tenure I helped the program expand its language offerings. As a heritage speaker of the language, I was eager to share my family’s language and culture with Cornell students. When a student would come in to practice conversation with me, it would make my whole day. It is an amazing feeling to act as a resource for another student and to contribute to their language learning path.

In my sophomore year, I joined the cohort of Undergraduate Language Consultants and worked closely with graduate students in the International Teaching Assistant Program (ITAP). I provided language-specific feedback in the classroom and in one-on-one conversation sessions. Our conversations allowed me to get to know them better and engage in a cultural exchange.

What have you accomplished as a Cornell student that you are most proud of?

During my final two years at Cornell, I was a Rawlings Cornell Presidential Research Scholar. The opportunity allowed me to fund the research for my honors thesis in the Italian department under the mentorship of Professor Marilyn Migiel. My research focused on the renewed interest in Giovanni Boccaccio’s "The Decameron" during coronavirus. In my thesis, I analyzed articles about "The Decameron" published at the onset of COVID-19 and interviewed Cornell students. I explored parallels between the Black Death and coronavirus as well as themes and novellas that stood out to scholars, journalists and students as they read "The Decameron" in 2020-21. My research examines the impact of a classic work on modern readers.

I also wrote a second honors thesis in the German studies department on Thomas Mann’s "Der Zauberberg" ("The Magic Mountain") and Dino Buzzati’s “Il deserto dei Tartari” ("The Tartar Steppe"). Professor Timothy Campbell pointed out the connection between Mann and Buzzati and I could not ignore the opportunity to explore the intersection of German and Italian literature. My German studies thesis was a culmination of everything I had learned at Cornell: I used sources in English, German, Italian and Portuguese, drew a comparison between two works of literature and delved into other disciplines such as history, philosophy and gender studies.

As the first person in my family to go away to college and to have the opportunity to completely focus on my studies, it was so heartwarming to come to Cornell and find many professors who became invested in my academic endeavors, especially the professors who watched me grow from my first or second year to my final semester. Several months after graduating it is still surreal that my grandparents moved to New York from Southern Italy and never learned English and eventually their first grandchild attended an Ivy League university and graduated Summa Cum Laude twice, one for each of my honors theses.

How have your beliefs or perspectives changed since you first arrived at Cornell?

Since coming to Cornell, I have become more conscious of climate change. These past few years, I have worked to be a more informed citizen and Cornell offered me the opportunity to do that. I took an environmental science course and a plant biology course to better understand climate change and the planet we live on. I had already been vegan for several years prior to attending Cornell, but I was eager to learn what else I could do as an individual and what it would take on a global scale to mitigate the effects of climate change. I am also grateful to have met like-minded students who want to make the world a better place. Since living in Ithaca I have started composting my food scraps, shopping frequently at the farmers market and eating seasonal produce.

To explore my interests in the environment, I participated in a summer research program through the Latin American Studies Program. I worked closely with anthropologists from Brazil to conduct research on Quilombola communities. Quilombolos are settlements of Afro-Brazilians who are the descendants of escaped slaves. I focused my anthropological studies on climate change, and I learned about the Quilombolo's growing practices and the legal disputes surrounding their land rights, and I wrote a report about how Quilombola communities help to reduce the negative effects of climate change.

Every year, our faculty nominate graduating Arts & Sciences students to be featured as part of our Extraordinary Journeys series. Read more about the Class of 2022. 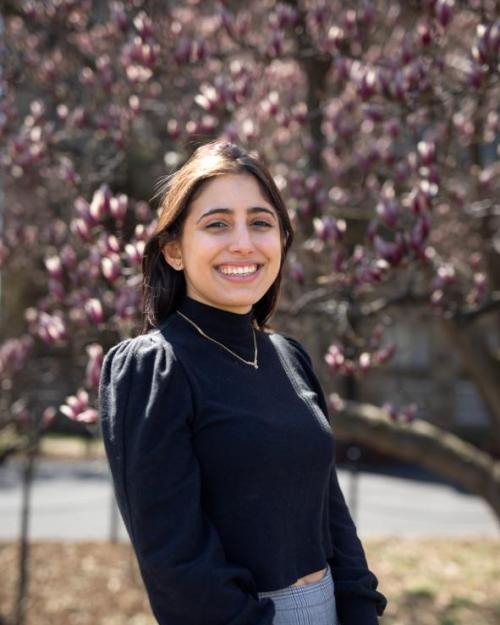